According to the latest transparency report published by Google, in the month of September 2013, they have received the request to remove 21.5 million urls.

Due to the exponential growth of online piracy and various copyright infringements, it is natural for them to receive requests for removal, however, 21.5 million in a month is a new high. 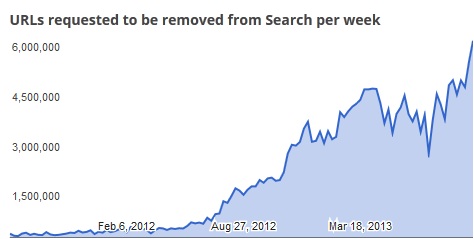 URLs to be removed from search requests

Google receives requests ranging from government to individual copyright holders every day requesting them to remove a particular URL, some content or to take down the whole website. This doesn’t mean shutting down the website, Google merely blocks these URL’s or websites from appearing in their search results.

All in all, a total of 21,508,657 URL’s, 36,211 Specified Domains were requested to be removed by 3,499 Copyright Owners and 1,881 Reporting Organizations. The top Reporting Organizations were British Recorded Music Industry (BPI), Degban among others. The top Copyright Owners were BPI LTD MEMBER COMPANIES, RIAA member companies. While the top specified Domains were zippyshare.com, dilandau.eu, beemp3.com, filestube.com and rapidgator.net.

Besides copyright holders, governments too request them to remove some domains or urls for various reasons. So far, nearly 40 percent of these requests cite Defamation is the main reason, 18 percent due to Privacy invasion and security violations. Other reasons cited include Electoral Law, Government criticism, Adult Content, Impersonation and Hate Speech.

Google first started publishing the Transparency Reports back in 2011 and they initially published reports on government requests but later on, they also began showing requests from individual copyright holders’ complaints on piracy and copyright infringement.

You may also check the complete report on the company’s official page.